What Do Cows Think About? 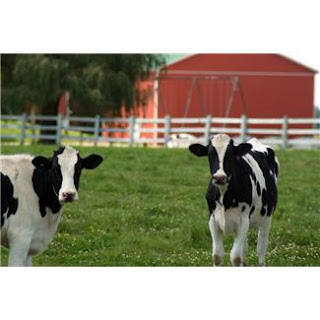 The other day I was trading amusing stories about our kids with a friend. A conversation I had with my son sprang to mind.

I had just dropped off his sister at school and was pulling away from the curb when he started telling me about his big adventure with Dad the night before. They had visited a dairy farm to pick up a load of manure. I’ll fast forward to the funny part, which is pretty much word-for-word.

He says, "And the cows, they were looking at me, and they were thinking, 'We haven't seen that kid before, he sure looks cute!'"

I ask, "How do you know they weren't thinking, 'He sure looks ornery!'?"

"Mommy," he replies, shaking his head as if my ignorance makes him sad. "Cows don’t know that word."

He was four-years-old at the time. Now he's a 3rd grader, but he still says the darndest things. Kids, they make you gray, but they keep you young. How is that possible?
Posted by Ms Verhoff at 12:11 AM No comments: 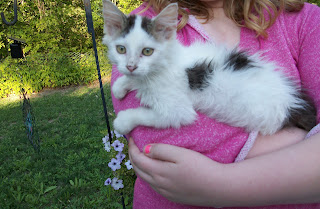 On a sweltering day this July, I was out on the back patio watering my flowers, when I heard a pitiful meow. I glanced around and saw a little fluff of white at the edge of the woods.

Before I continue, let me explain first that stray cats are a real problem here out in the country. I usually try to ignore them in hopes they'll go away. Yes, that sounds cold, but if I took in every stray cat that came around they'd overrun the place in no time. Then there's the fact that I'm allergic to cats....anyway, back to the white fluff at the edge of the woods.

As I got closer, I realized it wasn't a cat, but a little kitten. The temperature was close to a 100 F (38 C), so I brought her a bowl of water. She lapped it up in no time flat. Then I brought her crunched up dog food. She ate ravenously. Hubbie was grilling chicken. Against my protests, he called kitty over and gave her a piece of fat. Big mistake. Kitty stayed on that patio the rest of the evening. The kids were dying to hold her, but me being me, I was worried about diseases. Her ears were covered with scabs and missing their fur. I also reminded the kids that I'm allergic to cats. There was no way, NO WAY, we could make her a pet.

The next day I called every animal shelter in the area, several rescue centers, the vet office, the dog warden, and knocked on the doors of the nearest neighbors. You would think there would be at least one place that would take in a stray cat. I'm telling you, there wasn't. The shelters were full. The dog warden only takes dogs. No neighbors had lost a cat, etc. The plight of these animals is heartbreaking. It makes me want to shout from the rooftops, "People, get your cats spayed or neutered!"

It's the end of August now. The kids have named her Twinkie. I took Twinkie to the vet, where we found out kitty's a he, not a she. He has a nice place out in the garage. I was worried about Casey, our black lab mix, getting along with her, but they're actually starting to like each other. I bought him a cat tower, which he loves, and the usual kitty necessities. He's been dewormed and his ears have been treated for mites. They estimated him to be six weeks old when we took him in for his first appointment. His ears have since grown a nice new coat of velvety fur. The kids smuggle him into the house several times a day when they think I'm  not looking. Twinkie is here to stay, I guess. AH-CHOO!!!

All my writing pals tell me I need my own website. I believe them, but it's difficult to know where to begin. I had many false starts, but on the bright side, I know a lot more than I did starting out. I've learned about domain names and web hosts. I purchased my domain name from GoDaddy. I was told a good host for authors is HostGator. I checked them out, but I found the whole thing too complicated for my blood. This is in no way a reflection on HostGator. I'd probably have the same trouble with whatever company I went with. I know just enough about computers to be dangerous to myself and others.

I made an executive decision today. In the interest of keeping everything on the cheap, and relatively simple, I'm going with Blogger/Blogspot for the time being. In hindsight, I wouldn't have needed to purchase a domain name at all, saving me a few bucks. I looked at Wordpress after-the-fact, and I really liked what I saw, but I had already set up my account here. I might as well give Blogger/Blogspot a whirl. It's pretty simple, but I'm wondering if will support everything I want to do. Time will tell. It always does, eventually. 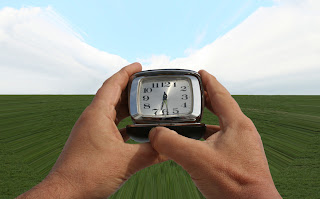 Posted by Ms Verhoff at 9:03 PM No comments: